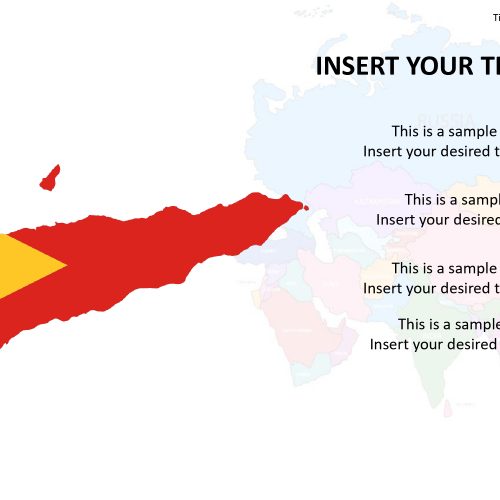 SlideVilla’s Timor Leste map template PowerPoint is a sovereign state located in Maritime Southeast Asia which is also known as East Timor. It is officially known as the Democratic Republic of Timor-Leste.

It consists of the eastern half of the island of Timor, the small nearby islands of Atauro, Oecusse, and Jaco, a field to the northwest side of the island. It is bordered by Indonesian West Timor Leste. Dili is the capital and the largest city with a chief port and commercial center of East Timor.

The editable map of Timor-Leste is created with PowerPoint shapes of each of the regions in the country, allowing the consumer to feature the complete country map and to create presentations of each state/region briefly. The maps are available with GPS location icons, location markers, and highlighting effects, that can be applied to a wide range of presentations.